As a Leader, Would You Give YOUR Medal Away?

"It is amazing what you can accomplish, if you do not care who gets the credit." Harry Truman﻿﻿﻿﻿﻿﻿

If you live in my home state of Victoria you’d have to have been hiding under a rock to have missed the annual excitement of the AFL (Australian Football League) Grand Final this weekend.

This was no ordinary Grand Final!

The Western Bulldogs (a team who faced the real risk of going under in 2014), triumphed over the Sydney Swans to break a 62 year premiership drought. In a gripping, roller coaster game, the lead changed hands many times and the win could have gone either way, until the last few minutes.

But as exciting as the game and outcome was, it was the humble display of leadership by coach Luke Beveridge that I’ll long remember. As soon as Beveridge had received his winning coach’s medal, he called Bob Murphy to the stage and hung the medal around an emotional Murphy’s neck.

“This is yours mate, you deserve it more than anyone.”

Murphy, a 295 game AFL veteran, had been with the Bulldogs since 1999. He’d captained the team from 15th to 6th on the ladder when a career ending injury in April relegated him to the sidelines.

Watching on must have been bittersweet and he’d have given anything to have been out there, leading his team to victory.

But fate had decided otherwise.

Success comes from long term effort, not the last 100 minutes

Coach Beveridge could have simply soaked up the post-match accolades. But in that critical moment he turned the spotlight on Murphy who had been key to the team’s success.

Recovering from his injury, Murphy had turned his attention to mentoring the less experienced members of the team, all of whom are paying tribute to the difference he made in lifting their game.

Coach Beveridge’s simple gesture was a powerful acknowledgement of someone who, although unable to play the final hour, had contributed skill, experience and leadership to build the teams capability.

When asked why he'd handed over his medal to Murphy, Beveridge said, "Bob is our spiritual heartbeat. The drive, the emotional drive and the climb you can attribute to him as much as anyone."​

The biggest successes in business result from consistent, often years, of hard effort. Team members will come and go and some will contribute more than others.

True leaders don’t only celebrate the final team. Beveridge’s gesture is a timely leadership reminder to acknowledge those key contributors who weren’t on the field to land your hard won, sweet victory.

Throughout your change project, it's worth keeping a record of key contributions, small wins and successes along the way.  In the euphoria of finally completing and winding up a project, it's easy to forget the behind the scenes differences individuals made that together created success.

Quick to see and respond to Coach Beveridge’s gesture, Captain Easton Wood didn't hesitate to share the victory with Murphy. 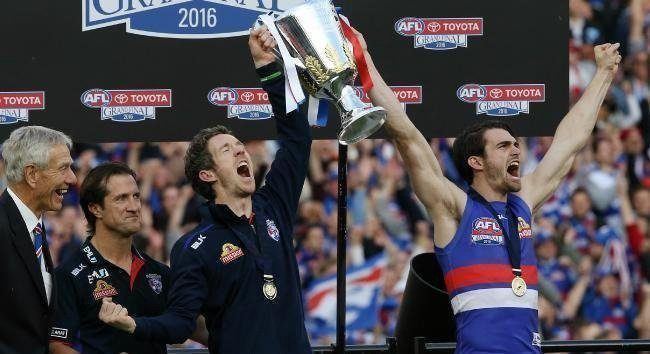 Sharing the limelight, together they held the cup high and received the accolades on behalf of the team they’d both lead to success. Notice the look on Coach Beveridge's face, standing quietly behind the action.

There may be times when you’ve put in the hard yards but feel a bit miffed that you didn’t get the acknowledgement and thanks you rightly deserved. After all, they couldn't have done it without you, right?

True leaders step back, check their ego and direct their pride to all who contributed to the successful outcome.

They recognise that their role was to develop the winning team and the team’s success is evidence enough of their own success.

#4 ​The most important leadership characteristics

At the end of your career, it’s likely the leaders you’ll remember most fondly are those who were humble and generous in their public acknowledgement of others.

Self assured (but not arrogant), selfless (but not submissive), they consistently gain respect by accepting praise whilst elegantly redirecting it to their team.

The Western Bulldogs will be rightfully celebrating their awesome success for a long time to come. While Murphy claims his place as a pivotal player and leader, Beveridge can stand proud of his demonstration of inspiring and humble leadership.

Next time you’re being recognised for your team’s success, remember to acknowledge those made it happen and ask yourself,

"Who will I give my medal to?"

(P.S. Turns out neither leader chose to keep the medal. Murphy later returned it to Bevington who says it will go into the Bulldog's trophy cabinet - an enduring symbol of exemplary leadership.)

Caroline is on a mission to help mid-career professionals and evolving organisations harness the power of change to achieve success in business, work and life.

How to Unlock Your Unique Difference and Make it Count!

REAL Leadership is What Your People Need Most Right Now

The Most Common Career Path Trap You Can Easily Avoid

How These Simple Lockdown Lessons Broke My Funk

How to Get More Value From Your Executive Coaching

How to Choose the Best Executive Coach for YOU

Six Simple Ways to Strengthen Your Leadership Influence that Actually Work
How These Simple Lockdown Lessons Broke My Funk
Why NOW is the Perfect Time to Get a New Job
How to Unlock Your Unique Difference and Make it Count!
Change Leadership – How to Navigate the Best Way Forward When There is No Clear Path
The Remote Leaders Quick Guide to Great Online Meetings
REAL Leadership is What Your People Need Most Right Now